Reframe Change, it’s not what you think.

Change management is a complicated endeavor. The stress of it, all the time it takes, the seemingly endless steps that go into doing it right; and that it sometimes fails… The whole thing, it seems, is just about not worth the hassle. We end up “why bothering” ourselves into paralysis and stagnation.

The reason small businesses fail isn’t all that often attributable to changes the company undertook, but rather that the leadership or their staff was weary to change at all. And frankly the word “change” pierces a layer of comfort we’d prefer in our daily lives. ‘Change’ contributes to an angst that really can do harm at the workplace. 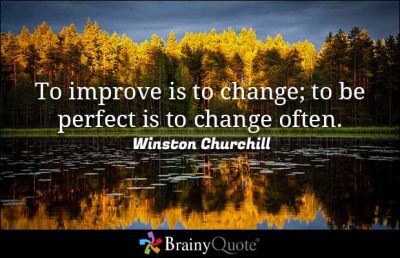 If the word ‘change’ has a bad connotation in your organization, here’s a little suggestion; instead use the word ‘adapt.’ Sure it’s semantic, but it is more than that, it alters your vantage point.

‘Change’ implies that you, your boss, or whomever is in a driver’s seat is taking the ship in a totally different unknown direction, randomly selecting from a vastness of possibilities and operating off a wild hair. It may seem unguided and lacking real world input causing your teammates to fear the worst.

‘Adapt’ is essentially the opposite, it means obstacles have been placed before you and you have two choices to choose from, the incorrect one being ‘sit tight, it’ll be fine’ the other being to avoid the abyss. The path may be astrew with things that get in the way, but inherently you (your staff) know your pin drop is in sight and that just because something is between you and there does not mean all is lost, it’s a detour, it’s a lane change. Whatever the path it feels normal and necessary. And maybe it’s even a little challenging. However it seems manageable and instead of coming across as irresponsible mayhem it sounds like a sober, methodical alteration based on input of circumstance, the marketplace.

Adapting puts you and your team in control, change puts fortune and fate in the driver’s seat. It’s a small change (pun intended), but we have found it to have dramatic results.

Speaking of change, looks like we’ll be changing our name soon. It’s not etched in stone yet, but Wistar Group is turning out to be a favorite name, so we bought the domain www.wistarold.temp.hosting.lcs.com. Or maybe I should say…we’re adapting our name to keep up with our professional, high-quality reputation.